iCandi Apps ® is passionate about designing and producing magical products and apps that enable you to interpret the universe in a whole new way.  Our Night Sky MiniScope™ and Night Sky™ is designed for all to use, from avid explorers, to those who just want a magical experience with the Night Sky™ from the comfort of their own garden!

A bit of history:

Taking inspiration from Steve Jobs’ Apple Keynote presentation, showcasing the ‘App Store’ and with the realisation that this creation could, and most probably would, revolutionise the way we live our lives, 2008 saw the creation of iCandi Apps ® by its founder Andy Weekes. With a history of website development and computer programming, finishing his day teaching Music to 11-18 year olds, Andy came home to work meticulously on developing his first idea. Within a week ‘iPet Attention’ was created.

After the submission and successful publication of ‘iPet Attention’ came the creation of camera utilised apps such as ‘iPet Photo’ and ‘iBaby Photo’. Andy’s confidence continued to grow in his capacity to create apps that people wanted to use and it was at this point that iCandi Apps ® decided to venture into the ever-expanding domain of Social Networking.

After many sleepless nights, came ‘Twitterena’ (later renamed ‘Tweeterena’), peaking at no.2 in the US Social Networking category, only to be kept from the no.1 spot by Twitter’s own Social Networking app ‘Tweetie’. Various other apps were created whilst ‘Tweeterena’ enjoyed success, they too gaining coveted top ten spots in countries around the world.

Andy’s appetite to create something really special was only strengthened by the success of the business, and on the 1st November 2011 original The Night Sky™ was released into the App Store.  Having explored the existing market for stargazing apps and often finding the experience of using these apps to be convoluted and more confusing than enjoyable, Andy dedicated the majority of his time to creating The Night Sky™. His vision of creating something both beautiful and informative, yet simple and easy to use was rewarded when The Night Sky™ sky-rocketed to the top of the paid reference app charts across the world, including the US, Canada, and the UK. Receiving both critical acclaim and a wealth of five star reviews by users worldwide, The Night Sky™ not only sat at the number one spot of the Reference charts for lengthy periods of time, but at the end of 2012 was recognised as the number 1 paid Reference app of the entire year.  The Night Sky™ was also featured by Apple as ‘Best of 2012’.

Andy’s drive didn’t stop there and he pushed iCandi Apps ® forward to release a second edition called Night Sky™ 2.  This saw similar success as its predecessor by hitting number 1 spots worldwide.  Night Sky™ 2 also had the honour of being installed onto every Apple Retail iPad device worldwide, so customers could experience one of the most magical apps on the iPad. 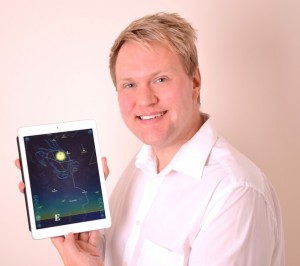 Andy says: “Due to my teaching career, I was already an Apple Mac enthusiast as they were used heavily in Music Technology. In 2008 one of my biggest idols, Steve Jobs, announced the iPhone App Store, something I had been anticipating for over a year before launch.  I was instantly inspired from his App Store and development kit presentation, and immediately downloaded the free development software from the Apple website.  I then played with it, learned a lot in my spare time, and it was a hobby that I thoroughly enjoyed.

Perseverance is the key to success.  I made 33 apps before Night Sky™, and was it not for this perseverance, learning along the way, I would never have seen the success Night Sky™ brought me.  The original version of Night Sky™ was created in my tiny bedroom in my parents house.  It just shows how accessible success is today, all you need is a computer and an Internet connection, but more importantly, a passion.

Some people say it was luck, no it wasn’t.  I could have stopped making apps at my 10th app, I persevered.  I would have made 100 apps if Night Sky™ hadn’t have come along and blew me away.

If you are passionate about something keep at it, keep pushing forward, and never allow set backs to get in the way, with a true passion this will just happen, quite naturally.”

Here at iCandi Apps ® we take attention to detail very seriously.  Every aspect of our apps are considered, reconsidered, refined then refined some more, so upon our gold master build you’re getting our very best work.

iCandi Apps ® has been working non-stop behind the scenes to completely re-write the Night Sky app.  We used Metal 2 for our Sky View, this required an entire re-write of the app, but the results are phenomenal!

iCandi Apps ® also launched Night Sky™ for Apple TV when Apple launched the Apple TV App Store in October of 2015. Developing the most relaxing and immersive experience that can be shared with others, Night Sky™ for Apple TV brings a personal planetarium to your living room, and provides an engaging educational tool for the classroom. Since it’s original launch on Apple TV, we’ve reimagined Night Sky™ on Apple TV with Night Sky Tours. Let Night Sky be your personal tour guide from the comfort of your own living room. Complete with new Environment Based Horizon Lines, the new Night Sky on Apple TV is introducing technologies taking iCandi Apps ® into its next chapter!

In 2017 we kept our record of being at the forefront of Apple product launches. iCandi Apps ® was one of the first companies to get apps released designed for iOS 11 and watchOS 4. Night Sky 5 has been developed to be available on the launch day of iOS 11 and watchOS 4. In the latest update to Night Sky, we’ve built on an already awe-inspiring AR experience with ARKit. Introducing a major new feature called the ‘AR Grand Orrery’! The AR Grand Orrery literally brings the entire Solar System into your home or classroom, so you can manipulate time and space with your finger tips. You can even see current space missions such as Juno, and their progress through space. The AR Grand Orrery will totally change the way we learn about the Solar System in an all new fun and totally immersive experience!

Andy and his team continue to drive iCandi Apps ® forward.  He is dedicated to ensuring Night Sky is the most magical experience anyone can have on Apple hardware. iCandi Apps ® is creating products that cause people that use them to quite simply, – Wonder no more.